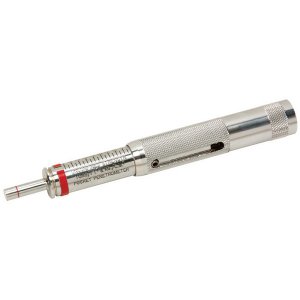 This test is used to determine the elapsed time between batching of a concrete sample and when it is deemed by standard methods to have set. The method involves measuring the penetration resistance of a test sample, which has had coarse particles removed at periodic intervals. It is particularly useful, in determining the effect on setting time of admixtures in the concrete, where these may have been introduced specifically to increase the setting time.

Consists of a needle having face area 3/10 sq.cm. and graduated at a distance of 25mm. The needles point is an integral part of barrel which houses a calibrated spring. The spring is confined in a sleeve. The resistance offered by the concrete mortar is shown on the direct reading scale with a marker ring which holds its position when released. Scale range is 0-50 kg/cm2 when the penetration resistance reaches a value of 35kg/cm2 the concrete is assumed initially set. Supplied complete in a leather carrying case. AS PER ASTM C-403